1970 – Futurity to Richert Despite Sour Engine 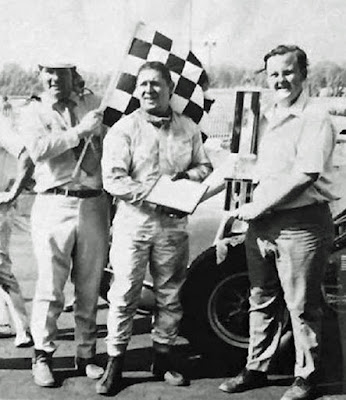 Des Moines, Iowa (June 7, 1970) – Jerry Richert of Forest Lake, Minn., erected a one-half lap lead in the early stages of the Hawkeye Futurity sprint car feature at the Iowa State Fairgrounds Sunday and it was a good thing.

Just after he took the white flag, which denotes the final lap, his engine went sour and to the estimated 5,200 wildly cheering fans it appeared he wouldn’t make it to the checkered flag.

But Richert nursed his Chevrolet-powered racer along and won the 30-lap event by approximately 150 yards over nearest competitor Dick Sutcliffe of Greenwood, Mo.

Richert, the four-time International Motor Contest Association (1964, ’65, ’66 and ’68), was near tears as his family gathered around to congratulate him.

The kisses he received from his wife Carol and daughters were probably most appreciated than any he ever received from a speedway queen, who so often makes the presentation of trophies.

Richert, who had things his way most of the afternoon, said he didn’t know what happened to the engine.

“The temperature started rising midway in the race,” he said. “Then, just after I took the white flag, it started sputtering.”

Richert was the fastest qualifier with a time of 24.12 seconds around thee dirt half-mile.

He started last in the 6-car trophy dash and finished second. He started in the third row of the 20-car field for the feature.

The track condition was dry-slick and under those circumstances, there is usually very little passing.

However, Dave Ross of Jetmore, Kan., was not content to sit back. He would start in the eighth row and finish sixth.

The victory was worth $500 to Richert, who missed most of last season while recuperating from chest surgery. He had won one feature at the Florida State Fair in February. Sutcliffe was paid $400, Woodside $300, Blundy $200 and Leavitt $150.

Jan Opperman, the defending Hawkeye Futurity champion did not compete. Jerry Blundy had won the 1966 Futurity and Jim Moughan of Springfield, Ill., won in 1967. The ’68 race was canceled due to the assassination of Robert Kennedy.