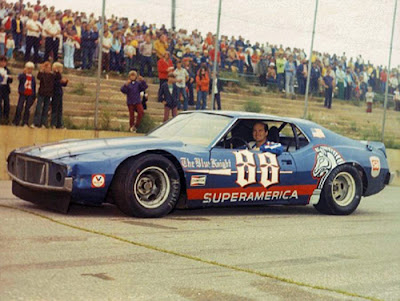 Oregon, Wis. (June 29, 1975) - Tom Reffner of Rudolph showed what to do when the brakes go out Sunday, winning the 100-lap feature of the Pepsi 200 at the Capitol Super Speedway.

The event, sponsored by the Pepsi-Cola Bottling Co. of Madison, consisted of two 50-lap races, a 20-lap consolation race and a hobby stock feature in addition to the 100-lap feature.

Reffner didn’t confine himself to the feature event. He opened the day timing in fastest with a 19.295-second clocking in a 1974 Javelin.

Then, after sitting out the first 50-lap race, Reffner came back to capture the second after a tight battle with Joe Ruttman of Dearborn, Mich., who slid into the wall on the 33rd lap when his brakes went out.

The 100-lap feature saw Bill Retallick of Marshall jump into an early lead in his 1969 Camaro with Dick Trickle of Wisconsin Rapids and his 1973 Mustang close on his heels.

Trickle slid into the lead on the fifth lap and held it through the 40th as the field began to thin out behind him.

John Speers retired to the pits with mechanical trouble on the 18th lap and Fred Bender followed him a lap later. Reffner bided his time back in the pack.

John Ziegler of Madison moved up to third with his 1974 Camaro on the 22nd lap and held it through John Reimer’s accident on the 24th and the ensuing 13 laps under the yellow flag.

He pulled into second on the 37th lap and three laps later moved into the lead.

Reffner, meanwhile, was also moving up, grabbing the third spot on the 41st lap and second on the next. By the 48th lap, Reffner had his Javelin on Ziegler’s bumper, a position he held for the next 20 laps.

He finally eased past Ziegler and into the lead on the 60th lap, holding it through the finish although losing his brakes on lap 80.

John Reimer of Caledonia and his 1978 Camaro won the first 50-lap race, Necedah’s Jim Sauter and his 1969 Camaro the 20-lap consolation and Bart Kerman the hobby stock feature.