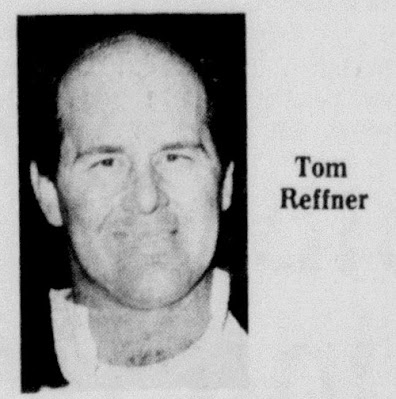 West Salem, Wis. (June 6, 1976) – Will history repeat itself? It certainly will if Tom Reffner of Rudolph is involved.

Reffner duplicated the effort and went one step farther, setting a track record of 20.423 seconds in the time trials during the second Dr. Pepper 150.

Reffner picked up $75 for setting the fast time of the day. $100 for breaking his old record in time trials, $30 for winning the 6-lap fast dash, $350 for taking the checkered flag in the first 50-lap feature and $500 for sweeping the third 50-lap feature race.

“The car is working pretty good," said Reffner, who has been running his newly built 360-cubic inch 1974 Javelin since last Tuesday.

Reffner made it look easy, winning both 50-lap races he entered.

He stayed in the middle of the pack in the third 50-lap feature, then wormed his way through the field to third on the 27th lap. On lap 30, Reffner was leading the 25-car field and won going away.

“Those guys were joggin' back and forth for a while early in the race, and I thought that was no place for me. So, I just laid back and didn’t get my nose in there," said Reffner "When things cleared out, I made my move."

When asked if the mid 90-degreetemperature had any effect, Reffner said. "My tires held up, but a lot of guys were having trouble with their tires blistering. When you get out in you just watch your gauges and hope nothing goes wrong

When I saw the 10-lap sign (10 laps to go in the third feature race) I took it a little easy. But you try to build up a good lead if you can. You want a cushion I you start having trouble," said Reffner, who was last year’s track champion here.

While Reffner was happy with his day's work, Larry Wehrs — owner of the La Crosse Interstate Speedway and Dells Motor Speedway at Wisconsin Dells — was not pleased with the attendance figure.