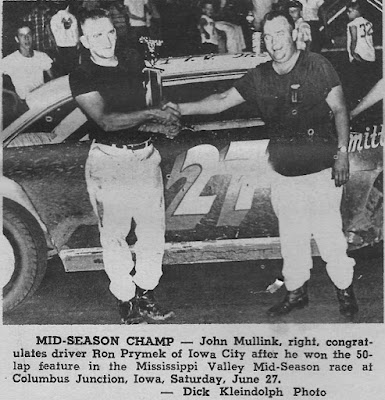 Bud Darting of Wilton, Iowa, finished a close second to Prymek in the main event. Bill Newman of Burlington, Iowa, took third, John Moss of Iowa City was fourth and Mark Mosier of Washington, Iowa, rounded out the top five.

Wahlee Brown of Rock Island, Ill., came from the back row to win the trophy dash. Morris would win the first heat while Tom Harris of Iowa City scored the win in the second heat. Crooks took top honors in heat three and Prymek was the fourth heat winner. Ralph Ericson of Lockridge, Iowa, was the consolation winner.