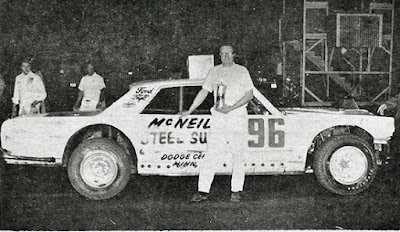 Seven cars were involved in chain reaction accidents on the first lap of the late model feature. Bob Dishman of Des Moines triggered one pileup when he spun coming out of the fourth turn.

On the second lap, another four cars collided when Bill McDonough of Cedar Rapids spun trying to avoid a spinning Dick Nesteby of Dubuque. McDonough cause another delay by complaining about his restart position.

Lem Blankenship of Keokuk led, until Williams, in a 1965 Chevelle, took over on lap 7. Verlin Eaker of Cedar Rapids, whose 1967 Dodge was involved in two separate accidents, started 12th, and finished second.