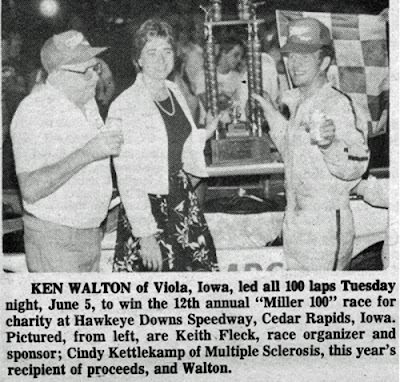 An estimated crowd of 6,500 saw Walton top runner-up Scott Sells of Waverly by 10 seconds and nearly a half-lap.

After the race, Walton noted how eerily close he came to a repeat fate of the 1983 Miller. Last year he led laps 1 through 92, only to be passed by eventual winner Roger Dolan of Lisbon on the first turn of the 93rd lap.

This year Walton didn't have anybody breathing down his neck, but he did scrape the wall of the first turn on . . . the 93rd lap.

“I was watching for that 92nd lap,” said Walton. “I couldn't believe it when I hit the wall in the same place on the 93rd.”

“I got a hell of a nice car,” Walton said. “We bought it from Ed Sanger (Waterloo car racecar builder) three weeks ago and haven't finished worse than fourth yet. I've got a good chance of winning the rest of the year.”

Sanger was one of a long line of drivers who had tough luck in the race. He was in second place as late as lap 49 but had to drop out because of transmission problems. He attributed part of his misfortune to neglect of his own car.

“I didn't get the maintenance all done on my car,” Sanger said. "Heck, it sat outside all afternoon. I was too worried about the other two cars. When you do that, you don't win races.”

What about the Allison’s?

Well, both were removed from competition by a multi-car spinout that happened off the second turn of the third lap. Davey came back later in the race but lasted just another lap. Both men seemed disgusted about being forced out so soon.

“Somebody got me in the back and spun me,” said Bobby, last year's NASCAR Grand National champion who came with his son from their Hueytown, Ala., home to compete.

“Sometimes it happens in your backyard, too,” Davey, who was racing on dirt for the first time in his career, seemed more bothered by the early entrance.

Sells took second after getting past Dolan on lap 32 and watching Sanger drop out shortly after. He never made a move on Walton, but nobody made a move on him for second, either.

Dave Birkhofer of Muscatine steadily moved from his 14th-place starting position to a third-place finish. Waterloo's Tom Bartholomew was fourth.

Last year's champ didn't quite have it this time around. Dolan started next to Walton on the front row, and was second for a while, but gradually slipped back to 10th. Then he slowly rallied to fifth thanks largely to attrition.