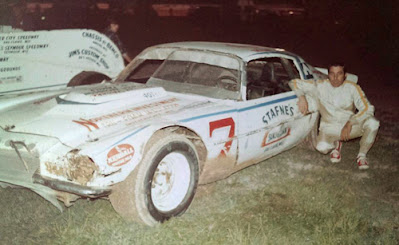 Eau Claire, Wis. (June 16, 1976) - There was just no one who was going to catch Altoona’s White Knight Wednesday night at the River City Raceway.

Flashing too much power on the straightaways and too much class in the turns, Tom Steuding sped off to win the Bicentennial Invitational 40-lap feature and $1,000 in the process.

The defending Wisconsin Dirt Track Series champion started from the pole, took the lead on the second lap and then showed nothing but his rear bumper to a feature field of 20 cars.

Steffen had moved up from his fourth row start to take second late in the race but dropped back to fourth place, finishing behind Duluth’s Jim Eliason at the finish.

Eliason picked up $475 while Steffen, the late model point-leader at River City this season, was left with $260.

But the real hard luck driver was Eau Claire’s Phil Prusak. The driver was engaged in a three-man duel with Steuding and Plank for first place when he was bumped on the north turn of the 34th lap by Altoona's Punky Manor and spun out.

With Prusak sitting dangerously on the track, flag man Jack Rada brought out the red and the race was stopped. Upon resumption, Prusak was forced back into eighth place, sitting ahead of only the lapped cars. He wound up at the finish in seventh with $125.

For Steuding, driving a 1976 Camaro owned by George Jacobson, it was his eighth feature win of the season.

He turned in the fastest time trial at 18.11 seconds, slightly off his track record of 17.61, and began the feature from the pole with Plank sitting on the outside.

But the first lap ended in confusion on the south turn and the red went out. In the process, Plank suffered a flat tire and action was held up for repairs.

Plank took advantage of the situation to jump ahead on the restart first lap but Steuding sped past on the second lap to take the lead and Prusak moved into second on the fourth lap.

The three cars pulled slowly away from the field and by the halfway point, had a lot of breathing space. They started lapping the field the 23rd time around.

All the time, Steuding was widening his lead and by the 30th lap he was pulling away. Plank passed Prusak on the 32nd to become the main challenger and two laps later, Prusak spun out and the race was stopped.

When action resumed, it was Steuding, Plank and Steffen at the head of the field and Steffen made his move on the 36th, passing Plank to take second.

But Steffen suddenly lost his power on the 38th and Plank roared back into the runner-up spot, Steffen dropping to fourth at the checkered flag

Steuding, previously, had raced across the finish line with a solid margin, however.

A crowd of 1,100 fans witnessed the extravaganza in chilly June weather.