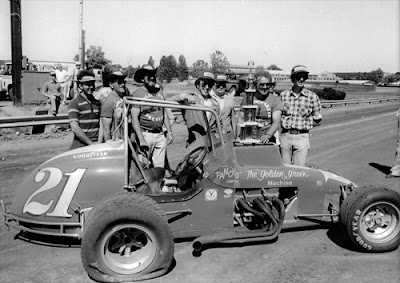 Duane "Pancho" Carter is joined by his crew after winning at Syracuse.

Carter accomplished the victory despite the fact that he damaged a wheel on his racer in a bout with the wall on lap 25, an incident which left some ill effects on the vehicle’s handling. Then in victory lane, the car’s right rear tire went flat.

Gary Bettenhausen, driving the Oberdorfer Special, scrambled from his 17th starting position in the 28-car field to finish second, just a little over 2 seconds behind the victorious Carter.

Bettenhausen had narrowed Carter’s advantage to just 1.1 seconds late in the contest, but slower traffic allowed the winner to expand his advantage in the closing circuits.

Bill Engelhart, Jim McElreath, Dana Carter and Bubby Jones, who finished third through sixth respectively, were the only other drivers to complete the event’s 100 miles.

Bubby Jones got by Carter for the lead on lap 26 and stretched his advantage, leading by 2 seconds at the lap 40 mark.

As the race reached the midpoint, Jones would have his problems getting around the slower cars and Carter took full advantage of the situation to vault back into contention.

On lap 50, Jones slid to high and Carter darted underneath him to regain the lead for good.

Carter averaged 91.347 miles per hour in notching the victory, his third of his career in the division.