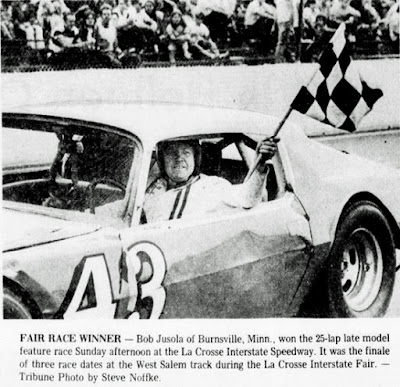 West Salem, Wis. (July 22, 1973) – Some of the names were changed, but the rest of the script was familiar here Sunday afternoon as Bob Jusola of Burnsville, Minn., won the 25-lap late model feature at the La Crosse Interstate Speedway.

Less than two weeks ago the 41-year-old Jusola won his first feature here ever in a close finish against regular winners Jim Back and Dick Trickle. This time, with Trickle racing in Missouri and Back out with a faulty engine, Jusola was tracked to the checkered flag by Dave Watson of Beloit, barely a car length behind.

Mike Miller of New Prague, Minn., started the feature from the outside pole position and led for the first nine laps before Jusola sped his little 350 cubic inch ‘72 Camaro to the outside and grabbed the lead he was never to relinquish.

Watson, in a ‘73 Camaro, passed Miller on the 10th lap also and never trailed Jusola by more than two or three laps as he kept the pressure on. Jim Sauter of Necedah placed third in the feature while Marv Marzofka of Nekoosa, the day’s second fastest timer placed fourth.

Back, a four-time winner here this season and Sunday's top timer, lost his oil pressure in the 5-lap fast dash, the first race of the afternoon, and was never in the competition. Sauter won the fast dash with Watson second and Marzofka third.

Buck Linhart of Wonewoc nipped La Crosse’s Don Turner at the finish line to win the first heat race. Turner led for all but the last few feet of the race after starting on the inside pole position. Sparta's Fred Becker was third.

Don James of Minneapolis piloted a '72 Chevelle to the third heat victory with Sauter and Jusola running second and third respectively.

It was a one-two finish for La Crosse drivers in the 15-lap semi-feature as Ralph Bakewell’s ‘69 Torino beat out Don Grant in a ‘71 Nova. Linhart placed third.

On the final lap of the semi, La Crosse's Larry Anderson hit the wall on the back straight and bounced off, colliding with Gordy Platt of Wisconsin Dells. There were no injuries.