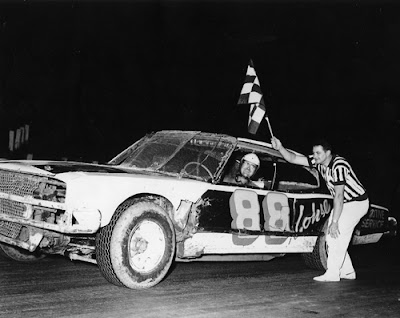 East Moline, Ill. (July 28, 1968) - From the scrap heap to the winner’s circle, that’s the route Jim Gerber’s #88 Dodge Charger followed during the weekend at Quad-City Raceway.

Gerber’s car was nearly wiped out during the feature race Friday night over at Mississippi Valley Fairgrounds in Davenport. But his mechanics rebuilt the wreckage all day Saturday and yesterday, and by the time the 25-lap late model feature was called last night at Raceway, the machine was ready.

He started in the back of the 12-car feature field but worked his way forward quickly. Benny Hofer of Rock Island, was the early leader, starting in front row, but Del Williams of Aledo edged past Hofer on third lap after a stoppage was caused by Ray Guss hitting the wall during second lap.

Gerber soon muscled past Hofer into the runner-up spot, and after making up ground, overhauled Williams on the 11th lap and led the rest of the way.

Don Bitner of Peoria worked his way around Williams on the 14th lap and pursued Gerber, but couldn’t catch him. He finished second and Williams was third, ahead of hard-charging Dean Montgomery of Milan.

The track became extremely hard by feature time and the late model cars had difficulty maintaining traction when they accelerated.