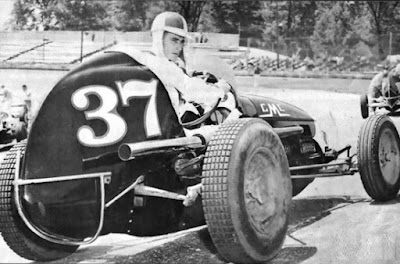 
Anderson, Ind. (July 6, 1957) – What might have been the closest finish in Little 500 history turned into a decisive triumph for Johnny White of Hazel Park, Mich., just 16 laps from the end of Saturday night’s ninth annual 500-lapper at Sun Valley Speedway.

White drove his black #37 Stevens Special, a GMC-powered sprint car owned by Hoy Stevens of Fredericktown, Ohio, to a 12-lap victory in the annual big car classic before a crowd of over 9,000 spectators from all parts of the country.

But as late as lap 484 White was involved in a red-hot duel with Red Amick of Muncie, Ind., who relieving Bob King of Muncie in the #2 Hall Farms Special, was riding a little over a lap behind the 24-year-old Michigan chauffeur and clipping off a second from the leader’s margin every time around.

Sixteen laps before the end, Amick pulled into the pit area with mechanical issues and that left a clear field for thee youthful White, who continued to live up to his reputation in the racing circles as one of the most promising drivers in the business.

When White took over on the 330th lap, which he never relinquished, he was the fifth driver to front the pack. King, piloting the Hall Farms car which Amick had qualified for the pole on the opening day of time trials, grabbed the lead on the first turn of the race and held it until lap 30. Then Amick, who before the race had switched to the twin-finned Chrysler-powered Archie Lacy Special from Houston, Tex., took over. He held the lead until lap 69, giving it up to Leon Clum of Wapakoneta, Ohio, driving the beautiful LaWarre Mercury Special from Lima, Ohio. Clum led only seven laps before he retired to the pits with a smoking rear end, allowing Amick back into the top spot.

Amick’s car quit on lap 131 and that left the way open for Ronnie Duman of Dearborn, Mich., to take over in the #18 Leonardo Mercury Special, who had been setting a smoking pace running in second.

Duman went into the pits on lap 284 but his crew got him out in 37 seconds and was still leading King by two laps when he rejoined the race. But Duman had to make another pit stop on lap 329 and that was when White charged into the lead.

In the meantime, Amick had jumped into the Hall Farm car and set out to catch the speeding Michigan driver. On the 248th lap, Amick spun and lost four laps but still retained second place. He spun again on lap 375 but once again held on to second place, as he restarted quickly.

The last stages of the race developed into a exciting two-car duel with White having to push hiss machine to stay ahead of the determined Amick. On lap 414, White made a pit stop in which he lost four laps but still retained a two-lap advantage over the Muncie pilot. Amick soon passed White to cut the lead to a lap.

Amick’s car was the last to drop out of the race and 20 cars were still on the track when the checkered flag waved.

White became the second non-Hoosier in a row to win the Little 500 following Bob Cleburg’s victory last year. Cleburg, from Madison, Wis., qualified last year’s winning car for this year’s race but demolished it in another race and didn’t start Saturday night.