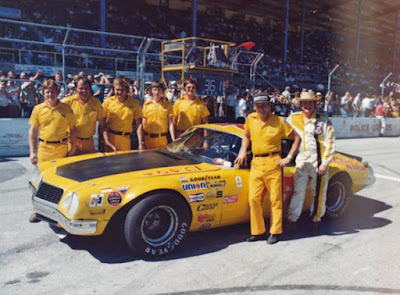 Butch Hartman poses with his crew prior to the start of the 1976 Miller 200.

Hartman, driving a 1976 Camaro, passed Sal Tovella in a 1974 Plymouth to take the lead for good on the 158th lap of the Miller Brewing Company-sponsored 200-mile United States Auto Club event.

Afterwards, Hartman used a one-two combination on a fan among a group of hecklers using obscenities.

“I don’t like it," he said after the scuffle, which ended with the spectator escorted away by four police officers “I don't allow words like that in my home and there’s no place for them here either. There's no sense in language like that in front of women and little children.”

Hartman, who had won the pole for Sunday's race, finished with a winning speed of 88.115 miles per hour, outdistancing Tovella at the end by six seconds in 97 degree heat that sent the track temperature to 147 degrees.

Tovella was hampered by rear spring and right rear fender damage suffered when his car was involved in a multi-car pileup on the 72nd lap after Paul Feldner’s 1974 Charger blew an engine. Oil from Feldner’s car spilled onto the track, and Hartman avoided the oil, but Tovella spun and crashed into Feldner’s car. Four other cars hit either Feldner’s car or the wall, but no serious injuries were reported.

Arlene Hiss, the first woman to drive in a Milwaukee-area stock car race, was lapped twice by the field in the first 16 laps and spun out in the second turn of the 29th lap. Neither she nor her car suffered any damage, and Tom Williams, owner of the car, took over the driving duties until the 72nd lap when his was the third car in the multi-car crackup.

Jack Bowsher, driving a 1976 Ford Torino, finished a distant third and Larry Moore, in a 1974 Charger was fourth. Fifth place went to Dave Whitcomb in a 1976 Camaro.

Defending champion Don White lasted 51 laps before pulling in because of brake problems. Ramo Stott, the defending USAC points champion, was knocked out of the race with a broken crank shaft pulley on the 89th lap.

Roger McCluskey, driving a Plymouth Volare kit car, was running third behind Hartman and Tovella with just eight laps to go when he pulled out of the race.

He was losing oil pressure," owner Norm Nelson said “And so, before he blew the engine up, he shut it off and came in.”

Had McCluskey been able to stay for the end, three of the top six finishers would have been small cars. As it was, two of the top five were compact models.