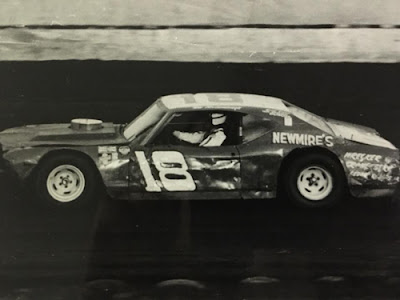 Huron, S.D. (July 17, 1973) - The son of the defending champion in the Huron Challenge Cup Championship, Tim McDonough of Cedar Rapids, Iowa, powered his 1970 Chevrolet Nova to victory lane at State Fairgrounds Speedway here Tuesday night as he claimed the main event over a tough field of 24 other competitors.

Tim McDonough, who placed second in the first running of the classic last year at State Fairgrounds Speedway, returned this year and earned a total of $715 in the event, which was witnessed by the largest racing crowd ever at the track - over 7,000 people.

The sellout crowd saw a total of 40 cars from South Dakota, North Dakota, Minnesota, Nebraska and Iowa compete in the second running of the $4,215 classic with Miller’s Willie Yost turning in the fastest qualifying time at 26.83 seconds.

The 20-year-old driving ace from Cedar Rapids made the long haul to Huron this year without his father, Bill McDonough, who won the race last year. The elder McDonough's car has not been working properly since being involved in a recent crash at Oskaloosa. Iowa. Tim and two other drivers completed all of the laps in the main event with Bob Kosiski of Omaha, Neb., and Arlo Becker of Atkins, Iowa, earning second and third respectively. Kosiski drove a 1971 Chevrolet Camaro and Becker a 1970 Chevrolet Chevelle.

McDonough's fastest qualifying time of 27.22 seconds placed him among the top eight, giving him a good starting position in the 50-lap main event.

Becker started the race in the pole position and jumped off to an early lead but McDonough soon put his 454 cubic inch powered racer in the lead for the victory.

Sheldon Reding of Harrold, Miller’s Bob Tong and Roger Swenson of Watertown were all one lap behind the top three finishers and placed fourth through sixth respectively. Leo Ray of Rapid City and Pukwana’s Carroll Priebe were two laps down to earn seventh and eighth.

Rounding out the top 10 finishers in the main event w ere Britt Williams of Pierre in ninth place and Butch Murner of Rapid City in tenth.

Kosiski, who earned the most money during the races with $735 in earnings, was the winner of the trophy dash, which was composed of the eight fastest qualifiers in time trials. His victory came only after the fastest qualifier, Yost, was forced out of action before even one lap was completed.

Kosiski, Yost and Reding all made contact in the front straightaway when the green flag went out. forcing Yost into the cement wall. His car suffered considerable damage and had to be scratched for the night.

Yost's qualifying time of 26.83 seconds was not a new record at State Fairgrounds Speedway. Kosiski was the second fastest qualifier at 27.00 seconds, followed by Murner at 27.03 seconds and Reding at 27.17 seconds.

Alan Gregg of Pierre had a respectable night, winning the first heat and the consolation. The consolation race was composed of those cars not competing in the main event.

The second heat found Huron’s Dennis Gross leading all 10 laps but being forced to hold off a persistent Bob Tong of Miller for first place.

A similar battle came in the third heat between Roger Mulder of Sioux Falls and Roger Swenson with Mulder leading all the way for first place.

Kosiski was the winner of the fourth heat by a respectable margin.

South Dakota Senator Harvey Wollman of Hitchcock served as the grand marshal for the challenge cup race, being an honorary flagman and also driving the pace car.