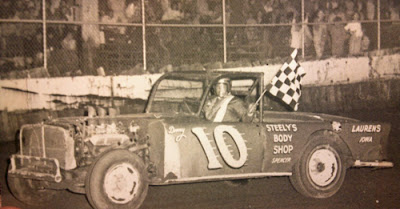 In the super late model main event, there were 12 of the original 22 cars running at the end of 30 laps, when the race was halted.

Despite heavy watering Sunday, the wind dried out the surface until it was hard, slick and dusty. The main event had been scheduled for 50 laps, but the track conditions, plus the lateness of the event due to numerous accidents, caused track officials to cut it down.

It took four starts to get the first lap of that race completed.

With the first lap finally completed, the next red flag came when Rich Green, Webster City, spun out in the fourth turn, and was hit head on by Greg Davis, Boone. Both cars went to the pits after that accident.

Amie Braland, Boone, was holding the lead at that time, but Earl Tice, Ames, riding a lower groove than most of the other cars, slipped by to take the lead.

As the racing action grew hotter, so did the tempers. Trying to regain the lead, Braland dove inside Tice slamming into him and spinning Tice into the infield. The race was restarted, and while the cars were circling the track taking their positions, Tice clipped Braland twice.

Because he was the one that spun when Braland hit him, Tice had to go to the back of the field for the restart. Trying to regain position later, he spun out again, but came back on the track and finished 10th. After the race, Tice protested to officials, but the results stayed the way they crossed the finish line.

Taking the lead about a third of the way through the race, Hovinga steadily pulled away, holding his edge the rest of the way.