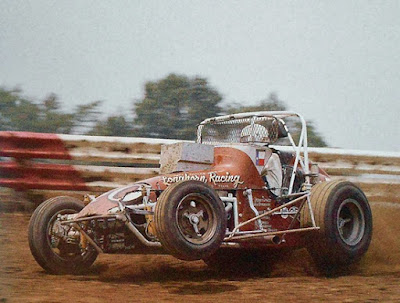 Terre Haute, Ind. (July 31, 1977) – After having scored a pair of USAC sprint car feature wins on the asphalt at Winchester Speedway last weekend, Bubby Jones showed his dirt prowess for which he is famous by capturing the circuit’s 40-lap feature at the Terre Haute Action Track, Sunday afternoon.

Sheldon Kinser, who is currently second in the division’s point standings, started on the pole and led the 20-car field through the first six circuits.

However, a faulty quick-change gear slowed Kinser, enabling Jones, who had started third, to take command on lap 7. Kinser went on to complete only 12 laps before his car became the first to drop out of the contest.

Even though he was not headed the rest of the way, Jones did have to ward off the stern challenges of Roger Rager and Gary Bettenhausen.

Rager, who took over the wheel of the potent Armstrong Mould sprinter while its regular chauffeur, point leader Tom Bigelow, was in Texas for a Championship race, finished second after starting seventh.

Meanwhile Bettenhausen, who had started ninth, was third at the checkered. Completing the top five was Bruce Walkup and Billy Cassella.

The event was slowed by only one caution, which occurred on lap 15 when a wheel came off Chuck Gurney’s racer while the California pilot was running fifth. Gurney was able to return to action following the mishap, but completed only 22 laps for a 18th place finish.