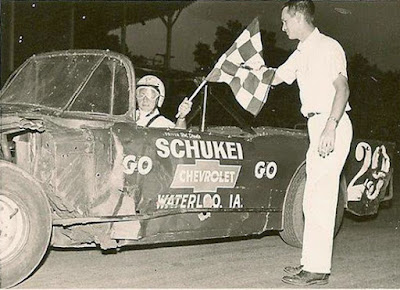 Red Droste is presented the checkers after winning at Davenport.

Droste, the point leader who earned the pole position through previous efforts during the 1966 campaign, zoomed away at the green flag and left the rest of the field fumbling for their gearshifts.

By the second lap, he was well in command and nobody was to catch him.

“I could have raced all night and still never caught him,” Dake, who earned $300 second-place money, said. “I couldn’t get a bite on the track and make anything out of it.”

Droste, $400 richer after the win, used a 301 cubic inch engine in his ’57 Chevrolet, but it was his old automatic transmission that gave him the jump on the rest of the field.

“I’ve got just a power glide transmission, but I knew if I held the pace down before we got the green flag, I could get away quicker than others.”

Both Droste and Dake were well ahead of the rest of the field at the finish. Jerry Reinhart of Moline, Ill., finished third, caught in traffic more than half a lap back from the leaders.

Droste reached heavy traffic ahead slightly ahead of Dake, dropped down inside, shot past a pack of slower cars, and was through before Dake could start his trek along the inner area of the racing surface.

With two laps remaining, Dake finally freed himself from the lapped traffic but ran out of laps in a sizzling attempt to catch up.