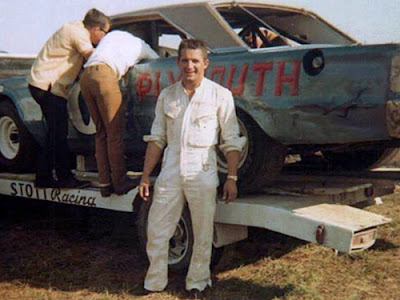 Stott, currently second in points behind Derr on the International Motor Contest Association national circuit, won the 25-lap late model feature before a crowd of 4,770.

Melton, Bill Hitz, secretary of IMCA and Kenneth Fulk, secretary of the Iowa State Fair, and an IMCA director, discussed a minimum of $50 fines and two-week suspensions at all IMCA regional tracks. A decision was to be reached Tuesday.

Dake, who is second in points at the Des Moines' half-mile, said drivers had objected to Derr and Stott racing here on May 11 when Derr won his second feature. “We didn’t think they were coming back,” Dake remarked.

Verlin Eaker of Cedar Rapids, the current point leader, was involved in an accident on the second lap and was sidelined with a flat tire.

Stott trailed second place Lem Blankenship of Keokuk from the third to the 15th lap. Derr, who mentioned that he was having handling issues, finished third. He managed to pass Blankenship on lap 23 but Blankenship regained the runner-up spot on the very next lap.

Only 13 cars remained after the strike and just nine started the feature.