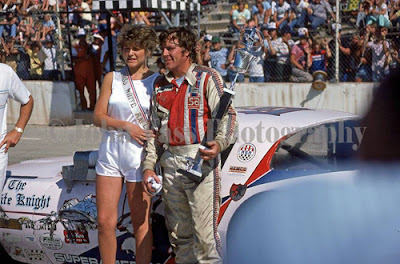 Kaukauna, Wis. (July 16, 1978) – Dick Trickle, arriving late to the track because of last-minute repairs to his 1977 Pontiac Firebird, won the second race in the Red, White and Blue State Championship Series on Sunday afternoon at the Wisconsin International Raceway. A crowd of 6,138 fans turned out to view the action, a record for the series.

“I’ve had a lot of overheating and water temperature problems lately. That’ why I got here late,” Trickle said after the victory, his second in the series on the half-mile paved oval this summer.

Rookie late model driver Pat Schauer of Watertown came from his front row starting spot and held the lead for the first four rounds with his 1977 Camaro. He was passed by Rich Somers, the 1974 series winner, on the backstretch. Somers kept his 1972 Mustang in the top position for the next three laps while Trickle was rapidly advancing towards the front.

Somers was overtaken by Mike Miller, driving a 1978 Olds Cutlass, as Miller slipped his car to the inside of Somers. Trickle followed Miller past Somers and set after Miller.

On the ninth lap, Trickle made his move, sweeping to the outside of Miller in the first turn. Tom Reffner, who crashed his ’77 Hornet in the first race of the series, moved around Miller on lap 14 to grab the runner-up position. Marv Marzofka, wheeling a 1978 Camaro, also got around Miller on the 18th circuit.

Reffner and Marzofka were able slowly chip away at Trickle’s four-car-length lead, which he held at the midway point of the 55-lap contest.

A yellow flag waved on lap 36 when some oil dropped from Roger Regeth’s 1978 Camaro. It was during this caution period that Reffner and Marzofka were able to pull up to Trickle’s rear bumper.

Trickle, however, was up to the challenge and held back Reffner and Marzofka to win by two-car-lengths at the finish. Reffner placed second followed by Marzofka, Miller and fast qualifier Joe Shear.