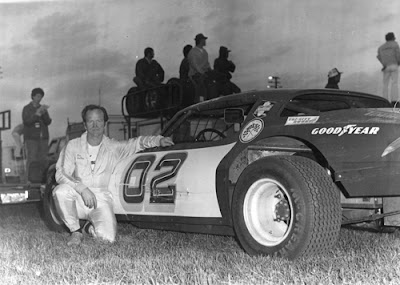 Cedar Rapids, Iowa (July 29, 1980) - Kenny Walton waited until the last minute to make his move and he couldn’t have picked a better time to do it.

The 37-year-old Viola resident flew by Waterloo’s Dick Schiltz on the 91st lap of the 100-lap main event and rolled on from there to capture the third annual El Kahir Shrine Directors Staff Stock Car Race Tuesday night at Hawkeye Downs Speedway.

Walton, who is now in his eighth year of racing at the Downs, had car owner Dwayne Schneider fly in from Iowa City earlier in the day to iron out some kinks in the new engine he had put in last Sunday, and evidently the overtime paid off.

“This is the best this car has felt all year,” said Walton while signing a few autographs and tending to his son Todd. “We worked all day on the car and I think we were the last ones getting to the track, but this really makes it all worthwhile.”

The former Marion resident jumped out front on the first turn at the start, and kept the lead throughout the first 12 laps.

Dike’s Curt Hansen, who had been on Walton like a shadow, then overtook Viola’s favorite driver with a little help from West Liberty’s Mel Morris. Morris was running near the back of the pack and when Walton tried to lap him on the outside, Hansen slipped inside and took over the lead.

By the 20th lap, Hansen had built up a sizable lead, but mechanical problems forced the 12-year Downs veteran out of the race and Walton regained the lead.

Schiltz, meanwhile, stayed right on Walton’s tail and eventually passed him on the 57th lap. He had built up a fairly comfortable lead until a run-in with the wall on lap 87 slowed him down just enough for Walton to make his move.

Walton, who drives a maroon and white Camera with the familiar number “02” on the side, flew by Schiltz four laps later on the back straightaway and played it cool the rest of the way to gain his second Downs feature win of the year.

Schiltz ran a 23.172-second lap in the time trials to set a new Downs track record but it was Walton who led from start to finish to win the 6-lap Trophy Dash.