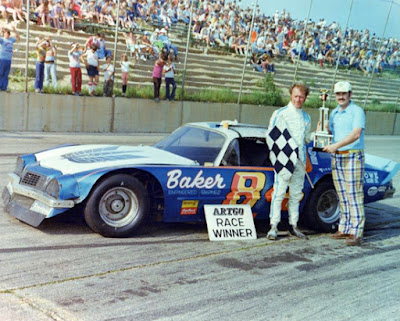 Bob Senneker is presented the trophy by ARTGO president Art Frigo after winning the SuperAmerica 150 at Madison.


Oregon, Wis. (July 2, 1977) – Bob Senneker of Dorr, Mich., was the big winner in Saturday night’s SuperAmerica 150 Monza Classic for late models at the Capital Super Speedway, as he set fast time and won two of the three 50-lap feature races to take home $1,740 in the ARTGO-promoted card. Senneker’s archrival, Dick Trickle of Wisconsin Rapids, edged him to win the other 50-lap feature.

Trickle’s victory helped him to a second-place finish behind Senneker in the event’s overall standings. Larry Detjens finished third overall, and was followed by Joe Shear, Steve Arndt and Mike Miller.

Senneker opened the program by blistering the half-mile track with a near-record 18.671-second lap in time trials.

In the first 50-lap feature, Senneker skillfully worked his way through the field and passed Arndt for the lead on lap 17.

By that time, one of the pre-race favorites, Tom Reffner, had already been forced to withdraw his 1974 Javelin because of engine problems.

However, Senneker’s engine continued to run at peak efficiency and he went on to take the checkered ahead of Trickle, Detjens, Arndt, Miller and Tom Jones.

Larry Schuler, one of the winningest drivers in the nation a year ago, was running fourth late in the contest, but spun on lap 40 when part of his rear suspension broke on his Camaro.

The second 50-lapper was slowed by an early yellow flag when John Spear had his car’s engine blow in turn on of lap 3, sending several cars spinning.

However, the red flag would fly at the mid-point when John Burbridge of Milwaukee crashed in turn three after his throttle apparently stuck. Burbridge was knocked unconscious and was taken to a local hospital for x-rays.

The stoppage allowed the rest of the field to close up on Senneker and when the green reappeared, Shear surged into the lead.

Senneker retaliated by passing Shear on lap 31 and then led the rest of the wat to chalk up his second feature triumphant of the afternoon.

Shear settled for runner-up honors with Detjens third. Trickle, who started at the back of the pack following a tire change after the first 50, came on to take fourth. Arndt and Fred Bender rounded out the top six.

Trickle needed only three circuits to get around Miller to take the lead in the final 50-lapper. Senneker annexed second place on lap 31 and made a strong run at the leader in the final few laps but came up 1.3 seconds short at the checkered