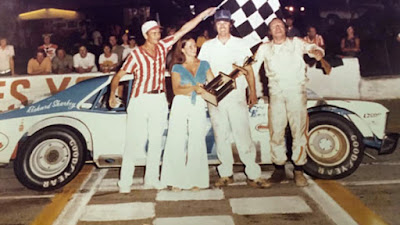 Williams burnt two pistons during hot laps prior to qualifications on Friday night. Since he was unable to qualify, he was forced to start at the rear of the field for the 300-lap affair.

But Williams charged hard throughout the race and was able to avoid accidents which brought out the yellow flag six times and the red flag, which halted the action, three times.

His Gary Emig-built 1972 Nova was running as strong at the end as it had in the beginning.

“When Gary builds a car, he builds it to last,” remarked Williams after the race, shaking his leg which had become numb from applying constant pressure to the accelerator for the long race. “It seemed to run better the more laps we ran.”

Terry Brumley jumped out into the lead as the green flag dropped to start the race, but Claude Thomas spun in turn one and the field had to realign for a second attempt.

Brumley and Jack Constable would have a drag race for the lead down the front straightaway and Constable would beat him in turns one and two to secure the top spot. Constable would set an incredibly fast past with Brumley, Joe Shear and Dick Trickle set up in a draft behind him.

On lap 10 Brumley would blow his motor and Joe Shear started pressuring Constable for the lead.

With Shear pressing Constable for the point on lap 48, the engine in Bill Crane’s car blew, scattering oil on the racing surface between turns three and four. Constable would hit his brakes with Shear’s car striking him in the rear, forcing Constable’s car into and over the wall and into the parking lot in turn three.

Constable’s car would flip end over end three times but Constable was uninjured. Constable would climb the wall and wave to the crowd to show everyone that he was okay.

The race would resume with Terry Bivins in the lead with Shear and Dick Trickle applying heavy pressure. Trickle would scoot past Shear on lap 65 for second place and on lap 151, pass Bivins on the back straightaway for the top spot.

Trickle’s lead would only last until lap 237 when his engine decided to let go, ending his chance for a third National Championship 300 title.

Dave Watson would hit the oil from Trickle’s car and crash into the wall between turns three and four forcing him out of the race.

On the restart, Bob Williams would inherit the top spot and hold it for the remaining 63 circuits.