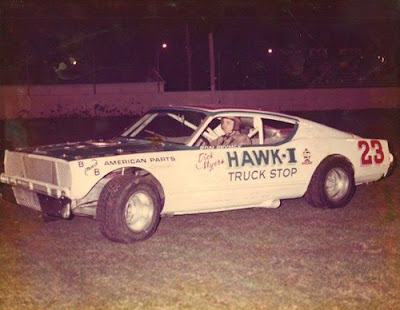 The lead position changed several times throughout the race, giving the large crowd of spectators much excitement Mike Niffenegger, Kalona, started in the pole position and led until a re-start on the first lap.

On the re-start, Niffenegger and Mel Morris, West Liberty, ran neck and neck, until another re-start after Larry Rummelhart, Riverside, lost a wheel and went into the first turn wall.

With three laps down, Morris took the lead, with Niffenegger and Ron Hemsted, Lone Tree, both on his tail, four cars piled up in the second turn. Morris hung onto the lead until the 19th lap, when he experienced difficulties and Ron Prymek slipped over the finish line to win the race.

Prymek had run in the second position for several laps after Niffenegger spun out on the 19th lap and Hemsted was sidelined with mechanical difficulties on the seventh lap.

Niffenegger started the evening by setting the fastest time at 26.02 seconds. Morris was second at 26.87 seconds and Hemsted third.

The fast car dash saw Bob Helm, Andalusia, Ill., power his way to victory for his first trophy of the season. Niffenegger started in the back of the pack in the first heat, and with superb driving, captured the first heat checkers.

Morris took honors for the second heat and in the third heat it was nip and tuck for Prymek and Rummelhart, with Rummelhart awarded the victory by a nose a t the finish line. Dave Dodder, Letts, came up with the semi-main victory.