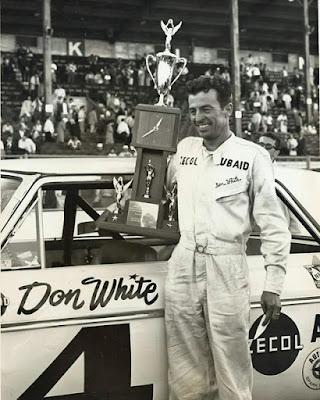 Then, he ran out of gas.

The handsome Keokuk, Iowa, driver took advantage of Nelson’s misfortune to take the lead before the leader could refuel his 1962 Ford. Moments later. White received the checkered flag and Nelson had to be content with second-place.

After the race, White knew exactly how Nelson felt. It was on August 17 of last year that White was leading on the 192nd lap when he ran out of fuel and lost the race. White also drives a 1962 Ford.

White set a pair of new records on Sunday afternoon. He turned in the fastest time trial in track history with a clocking of 37.62 seconds to erase the old standard of 37.90 seconds he set last year.

It was doubtful that the race would even get started, as time trials were halted twice by rain showers. The 20 mile an hour wind coming from the northeast wind, however, blew the threatening cloud cover away, and the one-mile paved oval was drenched in sunlight for the entire race.

Less than half of the 40-car field finished the race. The field was dominated at the start by Ford’s, with 27 starting the 200-mile grind.