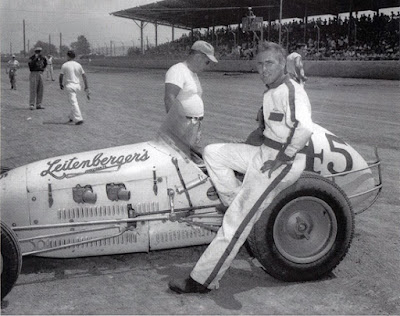 Jimmy Bryan and the Leitenberger Special

Terre Haute, Ind. (July 19, 1953) – A crowd of more than 6,000 was on hand Sunday afternoon at the Vigo County Fairgrounds when the “Smiling Arizonian” Jimmy Bryan, made it three straight feature victories.

Driving the same Leitenberger Special in which he made his record-breaking run last year, and second 30-lapper last month, gained him a virtual monopoly on honors at the local track.

Bryan’s winning time of 13 minutes and 49 seconds was slightly under two minutes slower than his 11 minute and 56 second mark that stands as the world’s record. He left little doubt to the outcome after wrestling the lead away on lap 7.

Tommy Hinnershitz, driving the famed #1 car in which he won the Eastern AAA championship four years running, started on the pole and was leading the field when they passed the grandstand the first time. Duane Carter, Hinnershitz’s Miracle Power Special stablemate, was right behind in second place.

On the seventh lap Bryan caught Hinnershitz in the backstretch and from then on it was a battle for second and third place as Bryan steadily increased his lead.

The current leader in the AAA championship point standings, Jack McGrath, clung close to Bob Scott as the two dueled on the turns and backstretch, but McGrath shot past Scott on lap 27 and stayed ahead the rest of the race to grab second place.

Scott settled for third while Mike Nazaruk and Don Freeland rounded out the top five. The race was McGrath’s first appearance here.

Seven cars were forced to pit with mechanical trouble, and Pat O’Conner, the Midwest point leader, spun out on the sixth lap. O’Conner wasn’t hurt and he was able to jump from his mount before heavy traffic bore down on him.