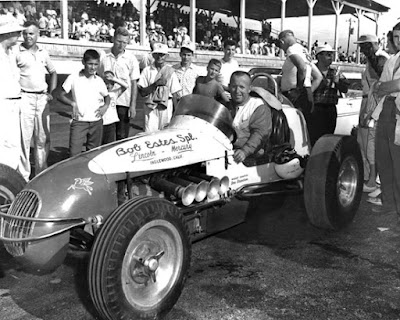 Branson’s feature speed broke the record he set here last year as he grabbed his third victory this season in sprint car racing.

Parnelli Jones, South Gate, Calif., a newcomer to the USAC circuit, placed second. Jones led 24 of the 30 laps in his Fike Plumbing Special.

Branson, who won at Terre Haute and Milwaukee, drove the Bob Estes racer, the same car he piloted in winning the Midwest title last year.

Jones won the first 8-lap heat and Foyt set an 8-lap record when he won the second heat in 2:35.87. Hurtubise won the third preliminary.

Although there were no mishaps, Jim Hemmings of North Vernon, Ind., thrilled the 6,000 fans on the first lap of the consolation race when he spun in the second turn but kept going.