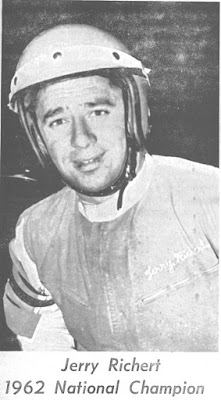 Knoxville, Iowa (July 21, 1962) – Jerry Richert hauled down one of the richest purses of his 13-year racing career here Saturday night in capturing the National Super Modified Championship against some of the best stock conversion drivers.

His victory in the rain-shortened program was worth $1,200 plus another $100 earned as a heat winner and a 13th-place finisher in qualifying.

The thirteenth spot was where the 29-year-old Forest Lake, Minn., appliance service man started the feature. He was six rows behind defending champion Roy Robbins of Louisville, Ky.

Eighteen laps and two red flags later, Richert was in front of the dwindling field, just ahead of Gordon Wooley of Waco, Tex., who chased Richert all the way in a futile bid.

Richert will split his earnings with Ted Ready of St. Paul, Minn., owner of the Chevrolet-powered roadster, which does double-duty as an International Motor Contest Association sprint car.

Richert, who runs from Tampa, Fla., to Minnesota, liked the Knoxville track, terming it, “The best I’ve run on and I’ve run on a lot.”

Officials were busy trying to get an actual count on attendance, which ranged from 12,000 upward paid. Grandstand seats were sold out three hours before the first race. Hundreds were met later with closed gates as there wasn’t even standing room in the infield.

Although the “B” main was cancelled by rain, drivers received regular purses on their starting positions. The main event was worth $4,200 for the 22 drivers that started.