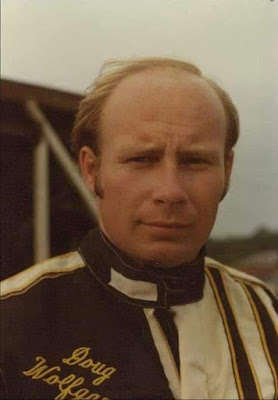 Sedalia, Mo. (July 14, 1979) – There was no doubt who was the best driver at the Missouri Sprint Car Nationals.

Doug Wolfgang of Lincoln, Neb., started on the outside of the front row of the 50-lap feature, took the lead in turn three of the first lap and easily won the championship Saturday night at the Missouri State Fairgrounds.

Actually, the race went only 49 laps over the half-mile dirt oval. Shane Carson of Oklahoma City, Okla., the defending National Speedways Contest Association champion and current point leader, spun out on the lap 49 and the race was ended.

That cost Carson several hundred dollars as he was running third at the time and was due to earn $1,500. He collected $300 for finishing tenth.

Wolfgang, who was driving the car which Carson had been driving all season – Carson was in the Bob Trostle sprinter, which Wolfgang had been driving – received $3,000 for the victory plus $250 for driving with Firestone tires.

And tires caused Wolfgang some tense moments. He was afraid they were wearing too much and on lap 33 he slowed and was only three car lengths ahead of Jerry Stone of Wichita, Kan.

Five laps later he decided to quit “pussy-footing around” and opened up an eight-car length lead. He was a quarter of a lap ahead of Stone when the checkers flew.

Jimmy Sills and Johnny Anderson, both of Sacramento, Calif., were third and fourth respectively, while Fred Linder of Fremont, Ohio, was fifth.