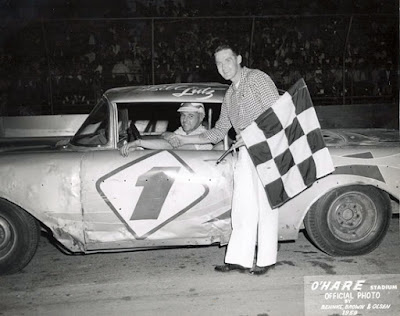 Chicago, Ill. (July 7, 1959) – Two of the best stock car drivers that can be found anywhere, for more than 50 laps, waged one of the greatest duels that will ever be seen during the 75-lap STARS Mid-Season Championship at O’Hare Stadium before the biggest crowd of the year.

In the quartet were national and defending O’Hare champion Fred Lorenzen of Elmhurst, Ill., who was wheeling a 1956 Chevrolet, and current O’Hare point leader and 1958 Chicagoland champion Bill Lutz of Louisville, Ky., with his 1957 Chevy.

Finally winning out and going on to win by surprisingly comfortable margin was Lutz, who continues to pour it on in making the 1959 O’Hare championship race a one-man affair. Lorenzen finished in second, about a half-lap behind when his car pulled up sour during the closing laps.

The 19-car field found Lorenzen, the fastest qualifier in time trials, starting 13th with Lutz right behind him. As starter Art Kelly dropped the green flag, both immediately set sail for the frontrunners. Taking the lead at the onset was Chicagoan Neil Houston.

Lorenzen, with Lutz right behind, move into command on lap 9 as the torrid duel between the two began to take shape. And then it proceeded for the now famous 50 some laps with Lutz gradually making hamburger out of Lorenzen’s bumper.

He continued to hammer away with seemingly little effect as the pair continued to lap car after car – every other entry in the event at least two times. It was lap 61 when Lutz finally took over and then quickly moved into an easy margin of victory in the record time of 19 minutes and 53 seconds.