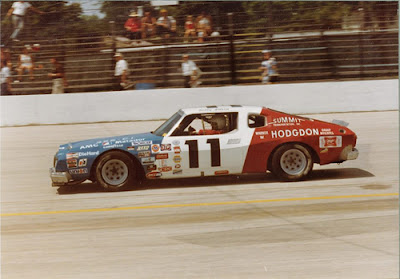 West Allis, Wis. (July 9, 1978) - Bobby Allison said the race was well contested on the track, but it was an off-track decision that made him winner of the Miller 200-mile stock car race Sunday.

Sal Tovella came in second in a Volare and Dave Watson was third in a Skylark, with Tovella's crew protesting Allison's victory, claiming his Matador was a lap behind.

“I've won races before, and things can happen like scoring errors taking it away from you,” Allison said. “The race wasn't too bad; it was well contested and then it was contested afterward too. I'm glad we got the official decision.”

A.J. Foyt finished fourth and Bay Darnell was fifth, both in Camaros.

Allison, 40, who won $9,922, is a Grand National stock car circuit veteran who made his second start at Milwaukee. He took the checkered flag three seconds ahead of Tovella.

But with the lap count not immediately resolved by officials, and with spectators waiting to cheer a victor, both drivers took a victory lap. In fact, both cars reached the victory circle and both drivers mounted the victory stand.

Many of the 23,471 fans stayed afterward for more than an hour until the officials’ made their decision.

Tovella’s crew contended Allison took a series of pit stops under the yellow flag on laps 131 through 134, putting him one lap back at the finish.

“I knew we never went a lap down,” he said. “They had the scoreboard fouled up, but that is a necessary evil under these circumstances.”

Foyt led almost the entire first 100 miles, then dropped from contention when a tire went flat after what would have been his last pit stop on lap 130.

Allison, winner of this year's Daytona 500 and Atlanta 500, finished second behind Watson in last year’s Miller 200.

The confusion, Saxon said, developed because Allison had been credited with one long pit stop when actually he made three quick pits under the yellow.