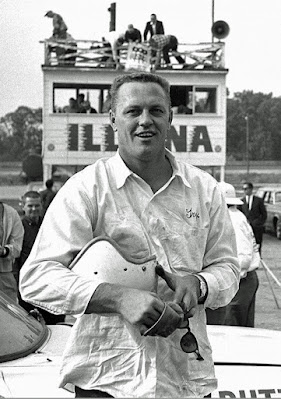 Ruttman’s victory came as a surprise as he was driving a 1962 Mercury which outran the many hot Pontiacs and Fords entered. Ruttman worked his way through traffic on the half-mile asphalt track and dogged Don White of Keokuk, Iowa, who had the lead from the start, from the 75th lap on, finally making an outside try pay off with only three laps remaining in the 100-lap contest.

Norm Nelson, driving a Ford, placed third in the United States Auto Club-sanctioned event after an early mishap which cost him a lap. Battling with Pontiac-mounted Paul Goldsmith, Nelson tried to go by on the inside, grazed Goldsmith and wound up on the corrugated bumps used to mark the inner boundary of thee track.

Nelson’s Ford spun across the track and backed gently into the wall. The Racine, Wis., pilot got restarted just as Goldsmith came around and then put on a display of virtuoso driving to make up the lost lap, repass Goldsmith and earned a hard-fought third-place.

The Ruttman – White action in the latter stages kept the capacity crowd standing as most of the 24-car field were still running.

White, in qualifying, set a new one-lap standard of 24.14 seconds while Ruttman’s 41 minute and 35 second mark was a record for the 50-mile distance.

The proceeds after expenses were pledged to the Bettenhausen Hospital Fund by promoter Harry Molenaar.