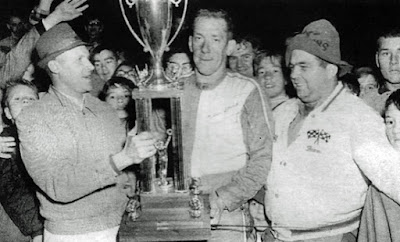 Oswego, N.Y. (September 27, 1964) – Nolan Johncock of Hastings, Mich., one of the most popular pilots to contend here over the last several years, scored his greatest triumph Friday night as he took first place in the eighth annual International Classic at Oswego Speedway.

Hundreds of admirers streamed to the track to surround the champion, but the actual heroes were estimated close to 10,000 patient fans who out-waited a penetrating six-hour rain and windstorm, which threatened to cause the race’s postponement until Sunday of next week.
Here, the management deserved accolades. Hounded by many who would have called off the race in deference to the elements, owner-operator Harry Caruso and track manager Will Hackett doggedly refused to yield to the demands and their stubbornness was eventually rewarded. Both officials, as soon as raindrops fell, decided all human attempts would be made to stage the race, in order that patrons who had travelled great distances, many more than 400 miles, would not be disappointed.

This, mind you, despite the fact rain checks were issued and, regardless of when the race was finally conducted, the management had the money in the bank.
So officials lounged somewhat uncomfortably in the booth for six long, dragged-out hours, but the program was finally completed to the satisfaction of nearly everybody. Most fans left the track during the afternoon, but when the interrupted program was resumed at 8:30 pm., it was felt all but perhaps 200 or so spectators were back in their damp seats.


Sam Sessions, whose 110.2 miles-per-hour proved the fastest in the time trials, led over the first 89 circuits, but was forced into the pit area for minor repairs and relinquishing the lead to Kenny Fisher.

Fisher, of Hamburg, N.Y. drove an expert race and led for the next 28 laps when Johncock forged ahead and maintained first place over the last 30 laps for the big win.