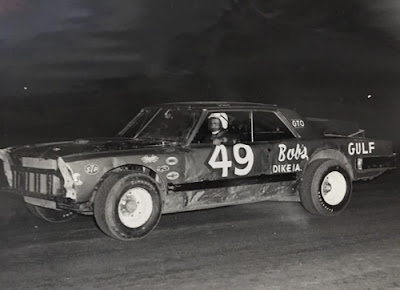 Joe Merryfield of Des Moines captured the 15-lap sportsman main when Sonny Morgan of Blue Earth, Minn., was sidelined on lap 14 after leading all the way.

The late model feature had been scheduled for 35 laps and the sportsman for 25. However, because of the cold – temperatures were in the low 50’s – and track conditions, drivers requested that the regular 25 and 15-lap events be run.

Stover, who piloted a 1970 Chevy II, won his first feature of the season although he finished second in points. He finished a full lap over second-place finisher Bob Hilmer of Dysart.

Darrell Dake of Cedar Rapids, who had been absent for the last two weeks, had mechanical issues on the first lap of the feature and retired for the night.

Dean Montgomery of Milan, Ill., who had won the last two late model features, started in the rear of the field and was unable to get to the front of the pack.

Morgan, who had won the three previous sportsman features, had a nearly one-half lap lead over Merryfield at one time. After the race he believed the rotor broke.