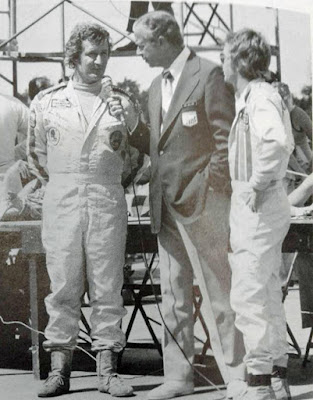 Indianapolis, Ind. (September 6, 1975) - At 35, Tom Bigelow, pint-sized as drivers go at 5-foot-9 and 165 pounds, finally has gained some measure of recognition by again doing something he feels has cost him recognition in the past - finishing second.

The personable Whitewater, Wis. won the biggest race of his career Saturday, the prestigious Hoosier 100, for the type of roadsters run in the Indianapolis 500 15 years ago.

Despite that victory, and two other triumphs in the five-race series, Bigelow was runner-up for the third straight year in the United States Auto Club division that has had the likes of A.J. Foyt, Al Unser and Mario Andretti as champions in the past.

Caruthers finished third, behind Bigelow and Foyt, a six-time winner in his 19 appearances in the 100-mile, $50,000 race at the Indiana State Fairgrounds mile track.

“Winning this race is very important to me,” said Bigelow, who earned about $10,000. “I’m still not sure how I can win three races and still finish second in the championship again.”

Bigelow, winner of more than 35 USAC races, said he would like more than anything now to make some improvement in his showings on the Indianapolis car circuit.