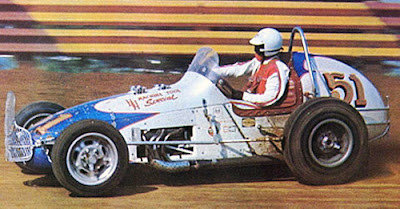 Terre Haute, Ind. (September 11, 1966) – Roger McCluskey of Tucson, Ariz., has sped away and virtually hidden from other drivers on the USAC sprint car circuit.

He won the 50-lap race at the Vigo County Fairgrounds Sunday after roaring past leader Greg Weld of Kansas City on lap 6. McCluskey collected $3,100 of the $8,225 purse.

Dave Lundy of Pittsburgh, Penn., suffered slight neck and back injuries when his car flipped sideways twice and end-over-end twice on the backstretch on the 31st lap and then rolled over the wall.

Yellow lights flashed when Ronnie Duman of Dearborn, Mich., and Bud Randall of Ridgeville, Ind., spun out on the first turn and when Don Branson of Champaign, Ill., hit the wall on lap 37.

Branson set the pace in qualifying, touring the half-mile in 22.95 seconds to gain the pole position in the feature.

Branson took the inside track to go into the first turn ahead of the field after the green flag waved. Weld, Mario Andretti and McCluskey in close pursuit.

After four laps, it was Weld, Andretti, McCluskey and now A.J. Foyt in the mix.

McCluskey moved wider on the track as he attempted to charge into the lead and on the fifth lap he moved forward passing the front-runners.

At the end of lap 6 McCluskey was in the lead followed by Andretti, Weld and Ralph Ligouri, who had passed Foyt for fourth place. McCluskey was never headed after taking the lead.

Duman and Randall spun in turn one on lap 8. Duman finally got restarted two laps behind the rest of the field but managed to finish the race.

Racing activity was held up for 30 minutes during the red flag period for Lundy’s flip.

After the race was restarted the yellow waved again on lap 39 when Branson got into trouble and drivers rode the caution light for 6 laps.

With McCluskey in the lead, Foyt started his drive for victory as the green flag waved and was in hot pursuit of McCluskey, who was riding high in the turns.

Foyt was pouring on the power, riding low on the track but on lap 48 he got a little too low and got himself mixed up with the infield guard-rail as he exited turn four. Foyt got his car straightened out but the mishap cost him valuable time and he finished third.