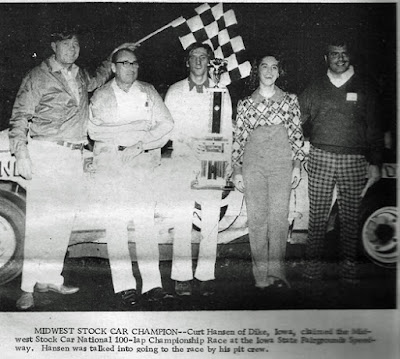 Bob Hilmer of Dysart, Iowa, led in the early going but was forced out of the race with a broken tie rod after a pileup involving Hilmer, Hansen, Lem Blankenship of Keokuk, Iowa, Dave Chase of Omaha and Fred Horn of Marion, Iowa.

Blankenship, in his 1972 Monte Carlo, led the restart and held it until just after the halfway mark, but blew a tire and was forced out of the race. Blankenship later re-entered the race but couldn’t make up the lost ground.

Hansen took over the lead from Blankenship on lap 58 and held it the rest of the way to the checkered flag.