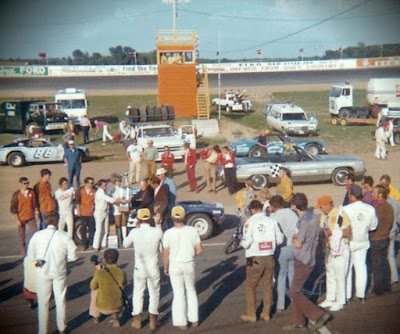 Dick Trickle accepts his trophy after winning the Old Style 200. It was Trickle's 65th feature win of the season.

Elko, Minn. (September 17, 1972) – It was the Old Style 200 Sunday afternoon and with Dick Trickle of Wisconsin Rapids, Wis., sitting on the outside of the second row, everyone was guessing who would finish second.

A dandy fight for second-place would develop between Joe Shear of Beloit, Wis., and John Ziegler of Madison, Wis., from lap 40 to 170. Ziegler would maintain second-place most of the way and when Shear finally dropped out after spinning and hitting the wall on lap 185, Ziegler finished the last 15 circuits without a fight. Shear would recover to finish 10th.

But it was Trickle who led from lap 4 to the end, putting a good margin between himself and the rest of the talented field. He did slow down the last 20 laps, but it was nothing to be concerned about as he was merely being careful as he negotiated slower traffic.

Noticeable among the early hotshots was Joe Ruttman of Westland, Mich. He was holding his own and moving good until lap 150 when he suddenly pitted and then dropped out altogether.

Trickle, meanwhile, went non-stop for the 200 laps, only slowing down for a caution flag between laps 150 to 160.

The victory racked up win number 65 for the young Wisconsin driver, believed to be an all-time record by any major driver in the United States.

The first 20-lap qualifying heat Sunday afternoon was won by Rich Bickle of Edgerton, Wis. The second heat was won by Phil Bickley of Wausau, Wis. This qualified each for a spot in the 200-lapper.

Marv Marzofka of Nekoosa, Wis., set fast time in qualifying and started 15th in the 200-lapper. He would finish fourth.