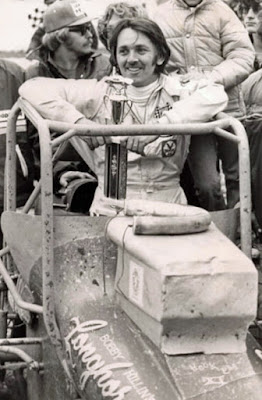 Bubby Jones is all smiles after conquering Eldora.

Roger Rager finished second in the main event, ahead of USAC point leader Sheldon Kinser, Tom Bigelow, Bill Engelhart and Clark Templeman. Only one other driver, seventh-place Allen Leavell, was still running at the conclusion of the event in which 20 cars started.

Kinser used his pole position to good advantage, soaring into the lead at the start of the contest. However, third-starting Jerry Weeks replaced Kinser at the front of the pack on lap 4.

The field was reduced by five on lap 6 when Dana Carter, Greg Leffler, Ralph Parkinson Jr., Larry Rice and Joe Saldana tangled on the backstretch, sending Leffler and Saldana barrel-rolling and bringing out the red flag.

Weeks remained in front briefly after the resumption of action but surrendered the top spot back to Kinser on lap 10. Four circuits later Jones, who had started second, took command by passing Kinser.

Jones was still in front on lap 35, when another tangle knocked Weeks, Johnny Parsons, Karl Busson and Ron Shuman out of the chase, necessitating another red flag.

When the green returned, Jones outdistanced the six remaining foes to pick up the victory.

Engelhart won a slam-bang 10-lap semi-feature which had to be halted on two occasions.