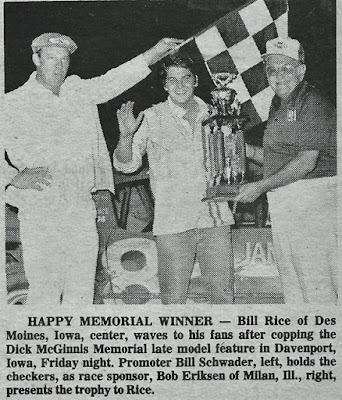 Davenport, Iowa (September 8, 1978) – Des Moines’ driver Bill Rice overcame a last-lap challenge to grab the checkered only a half-car length ahead of Roger Dolan of Lisbon, Iowa, to win the Dick McGinnis Memorial race at the Mississippi Valley Fairgrounds on Friday night.

Rice, driving a lightweight 1977 Camaro, has run only a handful of times on the half-mile oval at Davenport. His car is too light to make weight rules so he appears only for open competition events when weight rules are waived.

Dolan made his bid on the fourth turn, running low beside Rice. The two cars bumped together along the straightaway before Rice squeezed through for the victory.

Rice, the point champion at Eldon, Iowa, this year, boycotted the Des Moines track because of weight limitations.