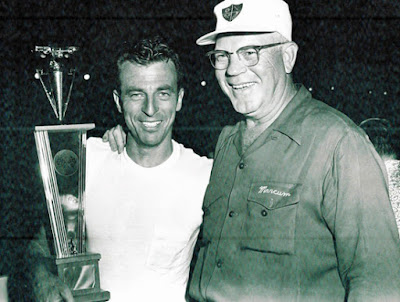 Detroit, Mich. (September 13, 1959) – Taking the lead on the 130th lap after a stiff duel with Bob James, Don White of Keokuk, Iowa, threw caution to the winds as he drove to victory in the 250-mile late model classic held at the Michigan State Fairgrounds on Sunday afternoon.

His time of 3 hours, 8 minutes and 18 seconds was a new track record.

White, who set a new track mark with a qualifying speed of 81.95 miles per hour, started on the pole, but Bob James jumped him at the green and stayed there until lap 16 when White went under him.

White kept his 1959 Ford ahead of the pack through the next 30 circuits, lapping all but Darrel Dieringer, also driving a 1959 Ford, and James, in his ’57 convertible. White held a 24-second lead over Dieringer with James another eight seconds back.

On the 106th go-round, White and Dieringer pitted for the first time and James went back on top. At this juncture, 26 of the original 42 starters were still running.

With 110 miles logged, James held a four-second lead over White with Dieringer a full lap behind in third. But James made his first pit stop on the 130th circuit and White went back in front, this time for good.

At the completion of 225 laps, White had built a 16-second lead over James One lap later, the yellow came out when Keith Ploughe plowed through the fence in the north turn.

On the 233rd lap, James lost his right front wheel and was all through. Norm Nelson slipped into second place and stayed there with Don Oldenberg taking third.

Eighteen cars finished the grind before an estimated 13,500 fans.