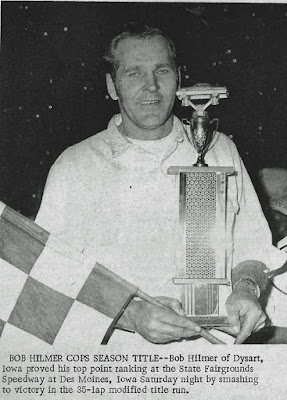 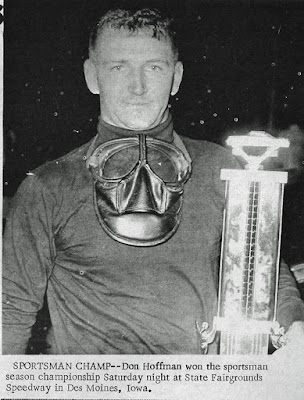 Hilmer of Dysart, Iowa, driving his 1965 Chevelle, took the pole position in the 35-lap season championship, and led all but one lap when young Lem Blankenship pulled ahead of him.

Hilmer also edged out Darrel Dake of Cedar Rapids, Iowa, in the first 20-lap feature that was being rerun after being rained out two weeks ago. Hilmer took the checkered flag in the second heat.

Hoffman, who opened up the evening in winning style by capturing the 25-lap sportsman season championship, trailed the entire race in the final 15-lap makeup feature. Trailing Carl Vander Wal of Ames, Iowa, who had won only one race at the track all season, led for 14 and a half laps before taking the third turn too high and spinning, letting Hoffman go home with an easy victory.

Vander Wal had accumulated a quarter lap lead over the half-mile oval. The spin cost him a victory and relegated him to a fourth-place finish.

Hoffman led the sportsman season championship all of the way – after 24 cars started the race. As it ended, only nine finished in the wreck-marred funfest.