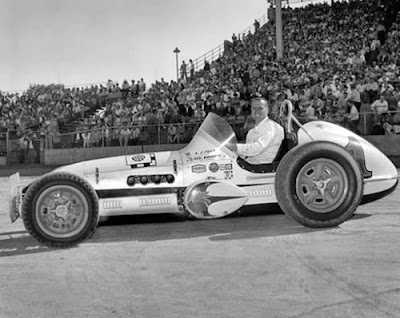 A record crowd of 36,646 contributed to a record purse of about S41,800 — biggest on the USAC championship circuit outside the $100,000 Memorial Day race at the Indianapolis Motor Speedway. Foyt collected $12,815 for his victory.

Parnelli Jones, Torrance, Calif., led the first 17 miles after slipping past Foyt on the first lap. Foyt’s white Bowes Special zipped in front on the 18th lap but Parnelli nibbled at Foyt’s exhaust pipe until Jones’ Agajanian Special quit in the 78th mile. They had lapped all the other starters and Foyt just cruised the rest of the way.

Foyt set a race record of 92.369 miles an hour, rubbing out the 92.142 mark set three years ago by Eddie Sachs of Coopersburg, Penn., whose qualifying run Saturday was too slow to make the 18-car starting field.

Foyt established a qualifying record of 102.975 miles an hour against a 1960 mark of 101.609 miles per hour by Roger Ward, Indianapolis, whose car quit Saturday.

The time trials were marred by a spectacular wreck involving A.J. Shepherd of Mitchell, Ind., whose car flipped over the retaining wall at the east end of the track and hit a horse barn. He was reported in critical condition at an area hospital. No spectators were injured.