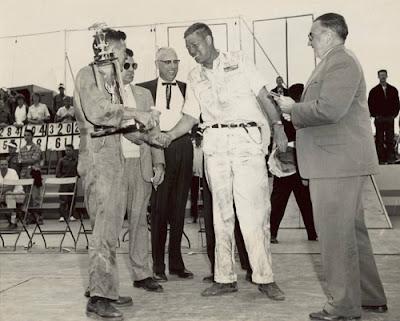 While 33,178 vocal cords triumphed their approval, Derr rolled across the finish line under a full head of steam. Beauchamp limped in second, with a blown-out front right tire to supply a dramatic finish in the North Star 350 non-stop IMCA late model stock car marathon.

This was the first time since 1952 that Derr, a Keokuk, Iowa, product, has come out of the fair as the big-money winner. The 140-pound, 36-year-old mechanic picked up a lush check for $1,500, a new trophy and prestige by the carload.

Beauchamp, who was nearly a casualty instead of a crusader, received $1,200 and proved his competitive greatness in the last two laps.

Trailing by a lap with time running out, Beauchamp was tooling his ’57 Chevrolet at a furious, charging pace on the 348th lap when he blew a tire on the straightaway. With shocking force, his machine rocketed dead ahead for the wall at the top of the east turn. The Chevy thudded off the concrete with heavy impact, but the dauntless Beauchamp got it back on course and struggled the last lap and a half to hold onto second.

Actually, it was more of a case of keeping his machine moving than anything else, for third-place finisher Bernie Hentges of Anoka, Minn., was eight lap back in hi 1958 Plymouth.

This, incidentally, was one of the finest stands ever made by a Twin Cities-area driver. Hentges is the jalopy champion of the Twin City Speedway and stamped himself as a potential star in the late model ranks with his smooth performance Monday.

The time of the race went into the International Motor Contest Association record books, mainly because this was the first race run at this distance by the organization. Derr was clocked in 2 hours, 52 minutes and 17 seconds, a good time considering the field came to a walk 10 times because of accidents.