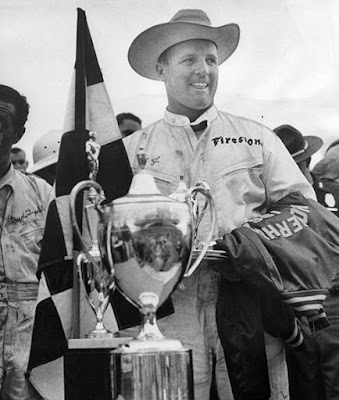 The triumph, cheered by 25,000 fans, was Foyt's 26th championship victory and his ninth this year alone. The Houston, Tex., speedster, who started from the pole position, collected $18,000 of a record $55,500 purse. Ward, like Foyt a two-time winner of the Indianapolis 500 mile race, finished the 100-mile grind over the bumpy Indiana State Fairgrounds dirt track 7.7 seconds behind Foyt and fell second to Foyt in championship wins.

Foyt's average speed was 89.056 miles an hour. The race was slowed several times by spins, but no drivers were hurt.

Foyt won the pole position with a qualifying speed of 102.887 miles per hour, although he was among the late qualifiers and had to make the test on a track already riddled with ruts.

Bobby Marshman of Pottstown, Penn., who was the first to qualify, started from the outside front row position on a test clocked at 102.244 miles per hour.

Marshman bolted into the lead on the first turn and kept it until Foyt overtook him on the sixth lap to stay in front for good. The two dueled until Marshman was forced out of the race with mechanical troubles on the 46th lap.