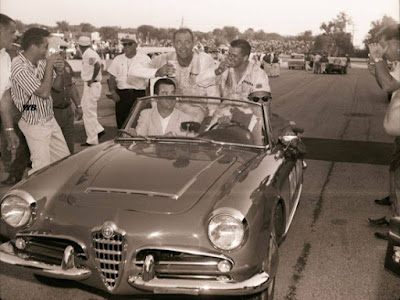 Jim Hurtubise and Norm Nelson take a victory lap after finishing 1-2 in the 250-miler at Milwaukee.

Hurtubise took the lead from Ed Kozbiel on the 64th lap over the one-mile paved oval and led for the remainder of the contest except for a single lap for gasoline. He averaged 93.26 miles per hour.

Bobby Isaac of Catawba, N.C., hit the wall late in the race while running third in a 1965 Dodge. He was not injured but the crash put his car out of commission for the rest of the race.