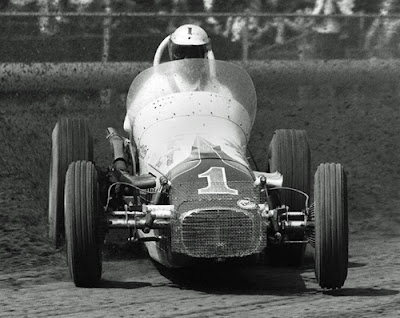 Foyt wrapped up his fourth United States Auto Club title in five years with a victory in the USAC 100-mile race on the dirt track at the Du Quoin State Fairgrounds.

Going into Monday’s race, only Rodger Ward of Indianapolis and Lloyd Ruby of Wichita Falls, Tex., had a chance to catch Foyt in the standings. But, both drivers had a dismal day, with Ward finishing 13th and Ruby 17th.

It was Foyt’s eighth win in nine races on the championship circuit and his 25th triumph in a major USAC event, tying him with Ward for most races won.

Foyt led all the way to cop the Ted Horn Memorial and finished five-eighths of a mile ahead of second-place finisher Bobby Marshman of Pottstown, Penn., the only driver Foyt did not lap.

Both Foyt and Marshman lapped third-place finisher Don Branson of Champaign, Ill., while Foyt lapped fourth-place Bobby Unser of Albuquerque, N.M. for the second time on the 99th lap.