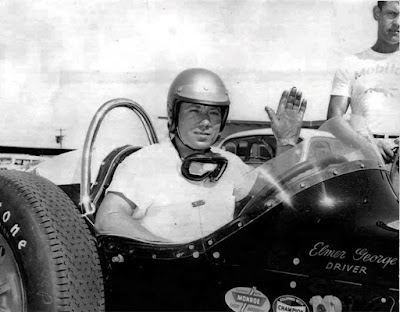 Du Quoin, Ill. (September 2, 1961) – An intense ex-sprint car champion, Elmer George, won the protested 26-lap USAC feature event on Saturday before 5,000. Confusion set in when poor communication between the starter and scorer sent the hectic race into an extra lap.

As the leaders swung off the backstretch and into the third turn, George brushed the lapped Don Branson, sending the Hyneman Offenhauser into a series of terrifying flips. Starter Pat Vidan whipped out the red flag.

Parnelli Jones – that intrepid Californian – who had dogged George the entire distance, was the first under the red flag and declared the winner. George quickly recovered from a near spin after the Branson-brush and continued around the track, besting Jim Hurtubise.

Branson was taken to an area hospital and preliminary reports stated he suffered from facial cuts and a split finger.

It was a day for records at the one-mile fairground track. The charging George posted a one-lap time that not only broke the six-year-old Don Freeland held sprint record, but actually eclipsed Don Branson’s championship mark of 34.46 seconds. New 3, 10, 12 and 25-lap marks were also established.

At the start it was George, Al Keller, Jones and Hurtubise breaking away from the pack. The Green Acres, Fla., ace soon faltered and found himself challenged by A.J. Foyt and Bobby Marshman. The tearing trio – George, Jones and Hurtubise – then tore turf for the next 25 laps. They finished in that order, but George was in trouble on every lap after the 10th.

Back in the field, Keller successfully denied Foyt and Marshman improved positions and further back Chuck Marshall, Don Branson and Rodger Ward conducted their own race. Branson passed to Ward and settled for 10th as the cars entered the 25th lap – and white flag – lap.

The Fike Plumbing crew protested the race because the red flag was displayed on the final lap, instead of the checkered. If the race had ended with the checker, Jones, who crossed the line first, would have won. The red flag reverted the positions back one lap – and George was declared the winner.

The purse was with-held pending a USAC decision on the protest.