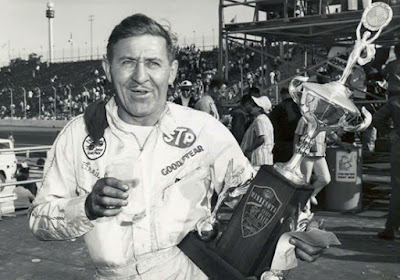 A cold drink and a huge trophy for Ernie Derr after winning the North Star 500.

St. Paul, Minn. (September 5, 1966) – The longest race in Minnesota State Fair history was not too long nor too grueling for Ernie Derr. It was rather deliciously rewarding. Yet, it couldn’t end soon enough…

The 45-year-old father of six won by five laps over runner-up Lenny Funk of Otis, Kan., and pocketed $2,200 in first place money. Saturday, he won the other late model feature, the Northland 300, and received $1,250 for that.

Derr, in his 1966 Plymouth, was the polesitter and stayed in front for all but 39 circuits. He lost the lead to his constant adversary and hometown chum, Ramo Stott, when he pitted for fuel on lap 151.

Thirty seconds later he returned to the half-mile asphalt oval and began his pursuit.

After first trying to pass Stott inside, then wide, he pulled even and finally went by on the outside on lap 190. He kept pouring it on from there.

“From that point on, I just wanted the race to end,” Derr said afterwards.

Stott was having problems handling his 1966 Dodge. He dropped back half a lap behind the leader when he spun on lap 257. He fell back to fifth place where he finished.

Derr, on the other hand, was driving swiftly and smoothly, increasing his lead by as much as seven laps at one point.

“Sometimes the car is temperamental,” said Derr. “But it gave me no problems today.”

A crowd of 19,741, the largest of the 10-day Minnesota State Fair racing program, saw nine yellow flags which slowed the action for 46 laps, and one serious accident, in the 3 hour, 30 minute and 54 seconds of racing action. Only 15 of the original 31 starters finished the race.