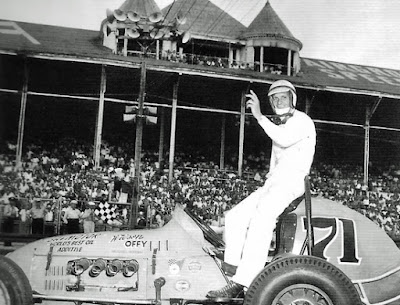 The 25-lap feature was held up for more than an hour by a heavy rainfall, but that didn’t slow Shepherd, the Gardena, Calif., native, driving an Offenhauser-powered vehicle. Shepard was also the winner in both races last year’s State Fair.

White became the third man with that surname to hold a one-lap track record, when he toured the half-mile banked paved oval in 20.87 seconds (86.25 miles per hour).

This is the fastest anyone has every driven at the Fairgrounds Speedway. Rex White holds the NASCAR record while the USAC mark belong to Don White.

Shepherd grabbed the lead on the first lap, and held it the rest of the way, but it wasn’t easy. White gave the crowd of 3,000 it’s biggest thrill on the ninth lap. Skidding on the wet pavement, he came off the banking on the first turn and spun completely around twice. At the end of the second spin he was pointed straight ahead and that’s the way he proceeded.

Before another lap had passed, he was on Shepherd’s bumper again. A.J. almost made a fatal slip on lap 11, coming off the final turn, when his car swerved crazily down the straightaway. He got it under control, however, before White could take advantage of any miscue.

From there to the finish, White tried every trick in the book to get around Shepard but couldn’t do it. “With a dry track he would’ve been gone,” said Jack Flynn, owner of White’s car. White agreed that there was only one dry lane, and he felt he could have passed had the track been drier.

Shepherd was happy as a lark. When you beat those Chevy’s with a great chauffeur like Johnny, you’ve done something,” he remarked.

Pete Folse, the IMCA point leader, tore his car up before the start of the second heat race. Completing the parade lap, Shepard and LeRoy Neumayer darted for the same hole. As Neumayer said, “The hole didn’t stay open for long.” Folse hit Neumayer’s rear tire and spun at full speed into the wall in front of the scorer’s stand. His car tore a huge hole in the wall and even a bigger one in his car. Folse escaped shaken but uninjured.