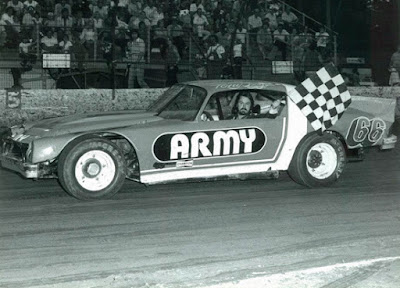 Willow Springs, Ill. (September 25, 1978) – Tony Izzo was the class of the 33-car field as he captured the National Clay Track Championship 200 for late models on Sunday afternoon at Santa Fe Speedway.

Izzo, driving a 1977 Camaro, topped off his best season by adding the triumph to his 1977 Santa Fe Speedway track championship.

The Bridgeview driver qualified for the front row the night before by winning one of two 25-lap features. He shared the front row with last year’s National Clay Track champion, Jim O’Conner, who also won a qualifying feature and started on the pole.

When the green flag fell, Izzo jumped into the lead and pulled away from the field. By lap 70, Izzo had lapped all but O’Conner, Arnie Gardner of Batavia and Ed Sanger.

On lap 98 Gardner made a move to get by O’Conner by slipping low. O’Conner held him off until they rounded fourth turn heading for lap 100. At that point Gardner stuck to the inside and took second, just inches ahead of O’Conner.

The rules require that the race be halted at the halfway point for cars to re-fuel.

The frontrunners, who had slowed, suddenly found themselves in the way of the fast approaching pack. The car of Bobby Shell ran into the back of O’Conner’s Camaro and ended up on top of the Kankakee driver’s car.

As a result, seven cars ended up piling into each other. J.J. Smith and Dennis Marcelle were the only two drivers unable to continue. A bit of fast work allowed O’Conner to return to action, minus his roof and a rear quarter panel.

The second half of the 200-lapper was relatively uneventful with Izzo again opening up a big lead. Throughout the remaining 100 circuits, Sanger tried to get by O’Conner for the third position. O’Conner, running the high groove, shut off repeated efforts by the Waterloo, Iowa, pilot to secure the position.

At the finish, it was Izzo winning by a half-lap over Gardner, with O’Conner shading Sanger by three car lengths for third. Fifth went to Curt Hansen of Dike, Iowa.