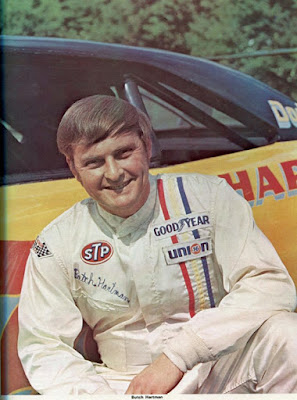 West Allis, Wis. (September 9, 1973) - Butch Hartman has finally achieved the
recognition that eluded him in the past.

The victory, by a lap over second-place Jack Bowsher and three laps over third-place Ramo Stott, also gave Hartman a sweep of the four 1973 races at the Fair Park. Only Parnelli Jones has won four straight at Milwaukee and he, too, did it in a single season, 1964.

Hartman, who had never won on the State Fair mile until the July Miller 200, came into the season with the reputation of a non-winning champion after taking the 1973 title without a first-place finish. At the beginning of the 1973 season he complained bitterly that he was an unknown, despite two straight stock car titles, because USAC publicized its Championship (Indy car) Division at the expense of the rest.

So, he took matters into his own hands and started winning. His complaints softened with the victories, and he not only publicized himself, but he gave the entire division a shot in the arm. Instead of attracting fans with the Indy car drivers who drop down a division for the big races, the stock division has its own star who beats everyone, including the Indy names.

None of the Indy car drivers were in Milwaukee Sunday, due partially to a scheduling conflict between Saturday’s qualifying and the scheduled but rained-out Hoosier 100 Championship dirt race in Indianapolis.

But it wouldn’t have mattered because no one has been able to touch Hartman all season.

“Everything is falling into place this year,” Hartman said shaking his head in wonder. “I think the hardest race I’ve had has been La Crosse (he won). And that was because the track was so short there was no time for a breather.”

Sunday was easy too.

“I never even intended to lead today,” he said. “You use up so much of your car when you lead. And a 250-mile race is hard on brakes. But I wasn’t ever running hard.”

He did have to come from behind once, though. Jack Bowsher won the pole again and led the first nine laps before Hartman passed him and everybody else for good on the 10th lap.

In the final laps of the race Bowsher was almost set to pass an easily cruising Hartman to unlap himself but Hartman gave his throttle one final jab and held Bowsher off.

“He said he was about to catch me when the race was stopped here last month.” said Hartman, referring to a one-lap mistake by the flagman which ended the Fair Week race early.